Dry aging in the restaurant

One of the major factors contributing to the sudden resurgence in popularity of dry aged meat is its effect on restaurants. Multiple, high-end restaurants have started offering dry aged meat as one of the hero dishes of their menus. And from this, in a few short years, gained enough popularity to be considered one of the ultimate food extravagances. This is because, while meat can be dry-aged as easily by a butcher, or even a home foodie, nowhere does its unique qualities shine as brightly as when it is used by a restaurant.

Dry aging refers to the processed of leaving meat uncovered to dry out under controlled atmospheric conditions. This allows multiple bacterial reactions to occur, which drastically develop the flavour and tenderness of the meat. As a comparison, the process is similar to that of creating blue cheese.

Dry-aging was first introduced into restaurants as an innovative chef’s new angle on the traditional steak course. Steak used to be one of the most pedestrian courses on most restaurants’ menus. However, it couldn’t be done away with entirely due to the amount of traditionalists who love to bite into a thick and tasty steak when dining out. Yet at the same time, the modern diner expects a restaurant to take them on a culinary experience when dining, rather than just giving them ‘tasty’ food.

Therefore, some decided to focus on improving the complexity and taste of the actual steak through dry-aging rather than the dish itself. This spawned a frantic ‘arms race’ among top-ranking restaurants to create the oldest and most flavourful steak possible. Many restaurants invested in their own dry aging equipment so they meat they use can carefully be aged to their exact needs. 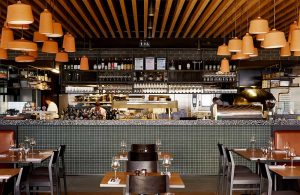 Though the average dry aged steak is set for around 28 days, many restaurants have experimented with extending out this period dramatically. Some truly daring restaurants offer steaks that have been aged for over 200 days. While this may sound far-fetched to the average palette, by this point, a steak has developed a flavour profile so far removed from that of your average, wet aged steak that can barely be recognised as the same protein. The complex notes of flavour are derived from the multiple chemical reactions that occur, and are intensified by the steak’s dramatic water loss during the process.

... developed a flavour profile so far removed from that of your average, wet aged steak that can barely be recognised as the same protein.

However, dry aged meat isn’t just a new menu item for restaurants. Because the process is so specialised and expensive to complete, dry aging has come to be a symbol of elegance, quality and artisanal individuality in the world of fine dining. Advertising dry aged meat on your menu is a sign of status – and a warning to customers that their bill may not be small.

Therefore, some restaurants like to display the dry aged meat they sell to customers, to provide a theatrical touch of excellence. A full primal cut, hanging in a dry aging cabinet is the perfect aesthetic for one of today’s steakhouses. A seamless mix of ancient techniques and modern technology. It also gives patrons the ability to select their own cut from a gallery of meticulously curated aged meats, providing an unrivalled gastronomic journey.

A modern diner continuously seeks a new and unique experience when they order food. In response, restaurants have to take each item they offer to an extremely high level. So to them, offering dry aged meat is a way to elevate the humble and everyday steak into an extravagant and complex dish that gourmands drool over. The dry aging trend in restaurants has grown immensely, and with its popularity among eaters and chefs alike, it seems set to stick around.