What happens to meat when it is dry aged?

It’s a touch of theatricality mixed with developed skills – dry aged meat has taken home cooks by storm – planning dinners 28-days in advance. But why the demand, what makes dry aged meat so special?

Quite often, it isn’t an ingredient you can purchase off the shelf – dry aged beef is made to order and to spec.

Dry aging involves the degradation of connective tissue and muscle protein structure of meat, in a climate-controlled environment that ensures growth of beneficial and non-harmful moulds.

As such, you will find that dry aged meat would have a far more developed and intense flavour, compared to wet aged meat.

Classified as a gastronomical treat, once only found at the most exclusive restaurants, maybe even off the menu, premium dry aged beef has become a sought-after ingredient, so sought after, cycles of meat are sold out before the aging process has been completed. 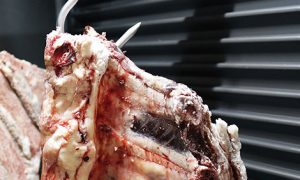 What is the secret? Why is dry aged so vastly different to the regular piece of meat we can commonly purchase?

The meat that most of us commonly purchase is wet aged, where lactobacilli bacteria grow in the absence of oxygen, and convert lactose to lactic acid which is why it may have a slightly sour taste.

How does the flavour change?

There’s a number of different factors that will determine the end result flavour of dry aged meat, from being grain-fed or grass-fed meat, storage temperature and relative humidity during the aging process.