The roots of dry aged beef – a trend with tradition 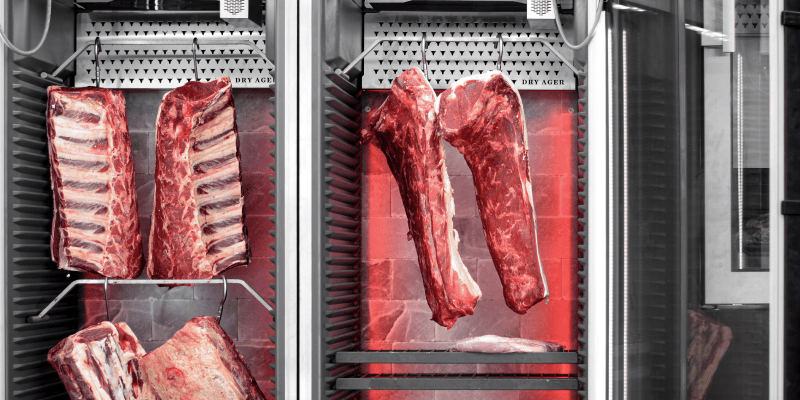 Dry aged beef is currently something every restaurateur and foodie talk about. Not only Michelin-star chefs and gourmets swoon over the unique taste and texture of dry aged meat. Hobby-cooks and grill-lovers reach for the dry aged steak more and more often, causing even supermarkets to offer grilled meat with a dry-aged label on it.

What is sold and served on the plate isn’t just a common ingredient, it’s a taste revolution, and is actually a traditional butcher craft.

The term “dry aged” means nothing more than the maturing of meat – one of the oldest methods in the world, to tenderise beef and make it more flavourful.

The roots of dry aged beef 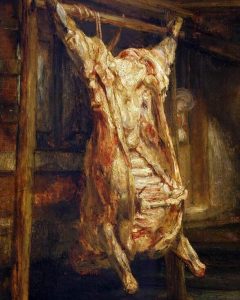 Only one glance at art history is sufficient to show that meat maturing is no new invention.

Even in the 17th century the painter Rembrandt captured this theme in his painting “The Slaughtered Ox”.

A cut open Ox is hanging in a dark Butcher’s chamber, the red meat is marbled with yellow fat.

In the background, we see the curious stare of the Butcher’s wife.

The hanging of meat

Back then, the procedure was simply termed, the ‘hanging’ of meat, because the meat was hung up by a hook.

The greatest malice were the unstable temperatures.

Beef too can be contaminated with dangerous bacteria whilst the meat matures.

Only due to further development of technical engineered cooling systems, the risk has been minimised.

Once, however, vacuum technology had been invented, the food industry changed its course.

So-called wet aging was then adopted. Enabling a faster maturing process with the benefit of having minimal weight loss.

Thereby meat could be sold by weight and more profit could be made.