Dry aging is a popular trend in the butcher shop and restaurant scene at the moment. It’s widely discussed by gourmands and home foodies alike, but many misconceptions about how it works and what it achieves still abound. When it’s explained to a a regular patron, that dry aging works by leaving meat open in a refrigerator to dehydrate and experience controlled decomposition, it’s easy to misunderstand. How can purposely allowing the meat to lose its moisture create a delicious steak, instead of hard beef jerky?

But, part of the magic of dry aged meat is that, despite its name, the finished product actually isn’t dry at all. Most who taste it actually report that they find it juicier than wet-aged beef.

You dry age meat by leaving it in a temperature controlled environment for a standard time of about 28 days. This allows a series of bacterial reactions to occur which enhance the flavour of the meat. A crust of fungus which grows on the outside of the meat while it ages furthers this tenderisation process, while adding a nice, corn-like flavour to your beef (you scrape this fungal crust off before cooking). 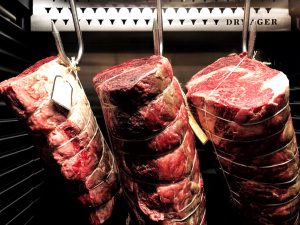 Natural moisture in the muscle is pushed outward from the core, but fat and bone coverage on the top and sides of each cut serve as waterproof barriers, forcing the expelled moisture to exit the muscle through the front and back.

So why isn’t the meat dry if it loses all its moisture?

Well, the aging process causes the beef’s natural enzymes to break down the connective tissue in the meat, making it tenderer. This process also occurs somewhat during wet-aging, but not to the same degree. When you dry age meat, it allows the muscles and tendons in the meat to release, and lose their toughness and stringiness completely.

Most who taste it actually report that they find it juicier than wet-aged beef.

This extreme tenderness almost gives the illusion of greater juiciness when you eat a dry aged steak. Furthermore, because the muscles in the meat have lost all of their tenseness in the process, they are unable to hold in the remaining juice in the meat, allowing it to flow out when eaten.

So, sure, you might not get the same flood of meat juice on the plate as you do when biting into a fresh steak, but you will still get that juicy, tender deliciousness of a perfect steak along with a vivid hit of pure flavour.

Son no, dry aged meat isn’t dry. Like a fine wine or a great cheese, beef will only improve with age, becoming a rich, gourmet and very succulent steak.