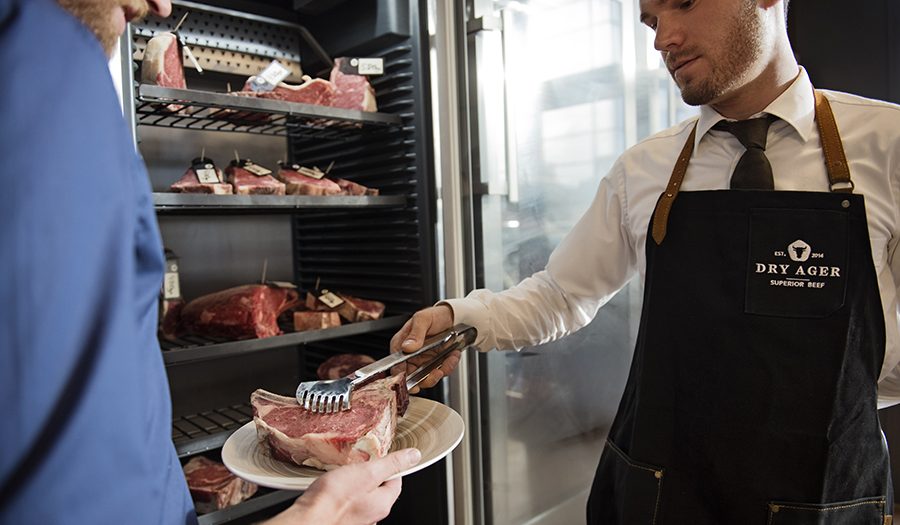 Dry aged meat is becoming increasingly popular, gracing the menus of steakhouses and high-end restaurants around the world. But not only gourmets and Michelin star chefs swoon over it, the humble hobby-cook or bbq lover is becoming to appreciate this new type of meat as well. However, is it truly something more than just the latest fad? What – apart from its high price tag – makes dry aged meat so special?

Dry aging meat is a process that has been refined over hundreds of years. Back a few centuries, it was simply referred to as ‘hanging’ meat, where butchers of the day would hang up whole carcasses to dry in the open air. Today, we have refined the process, eliminating the risks involved, and created the perfect technique to dry age meat with atmosphere-controlled cabinets. The meat is hung dry on the bone. That means it hangs in the air for up to six weeks at temperatures just above freezing point.

... meat must ripen before it reaches the optimum stage for taste and tenderness.

But why does simply hanging the meat to dry make it special? Well, like many other foods, meat must ripen before it reaches the optimum stage for taste and tenderness. Even the standard cuts of meat served at a butchers or the supermarket have gone through a process known as wet aging. They are packed in protective, vacuumed packaging, and left to age in their own liquids for a little while before being sold. 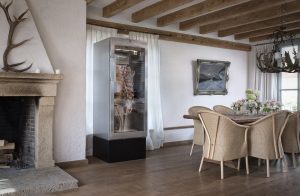 This allows the tough muscles and tendons in the meat to break down somewhat, making it more tender. Even the meat you buy at the grocery store has undergone at least 7-10 days of aging. It’s an industry-wide consensus that beef aged for at least this long is significantly better than freshly-slaughtered product, which ironically can taste “less-beefy” and highly metallic.

Dry aging meat takes time, skill and dedication. It is not a process that can be rushed or faked.

However the process of wet aging is far inferior to that of dry aging. Because, during dry aging, the meat is exposed to the open air, it actually goes through a carefully controlled process of decomposition. This means the flavour of the beef is altered during this process from a combination of bacteria, enzyme breakdown and oxidation. Creating the intense, complex, almost nutty flavours that gourmands delight in.

The process of dry-aging usually also promotes growth of certain fungal (mould) species on the external surface of the meat. This does not cause spoilage, but rather forms an external "crust" on the meat's surface, which is trimmed off when the meat is prepared for cooking, leaving just the melt-in-your-mouth tender inner flesh behind.

In contrast, while wet aging doesn’t improve taste, it can still affect it (and not for the better). In addition to an unappealing mushy texture, over-wet aging will also result in unpleasant, serum-like flavour changes from unwanted microbial growth.

So basically, the main difference between your common wet aging, and the more complex dry aging process is that while both increase the tenderness of the meat, dry aging tends to do this to a greater degree while also improving the flavour.

Dry aging meat takes time, skill and dedication. It is not a process that can be rushed or faked. But the quality of meat it produces, when done correctly is superior enough to more than justify this effort, as well as the slightly deeper draw on your purse.